Close combat duels in the West 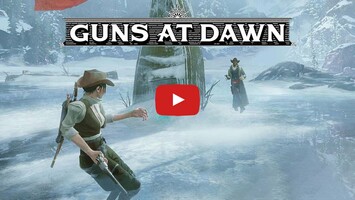 Advertisement
Guns at Dawn: Shooter Arena is an action and adventures game where you play the role of different gunmen to try and impose your authority in the Wild West. To do this, you will use all the available weapons and test your aiming skills for hitting different critical points on the enemy as accurately as possible.

In Guns at Dawn: Shooter Arena, all the elements and characters have been developed in 3D. This factor, together with a good soundtrack, lets you experience exciting PvP battles where other users try to win each duel. To prevent this, you need to press the shoot button and let go to open fire when you're aiming at an enemy's critical point. By doing this, you will be just one step away from reducing their health to nothing.

To move your gunman, you just have to tap on the joystick on the left of the screen. If you prefer, you can also change the button distribution until you're happy with them. What's more, you can also find rankings in this game that put you in the fight to rise to the top of every online competition.

Guns at Dawn: Shooter Arena is a gunman game that transports you to realistic 3D settings to open fire in close combat. Brazenly try to hit each enemy with your ammo while dodging their own shots.
Reviewed by Carlos Martínez Translated by Eloise
Advertisement

Why is this game not available in my country nepa?l Will it come in Country Nepal? When is the release date of it in Nepal?

Respawnables
Non-stop third-person action
Brothers in Arms 3
All the World War II action is back
Gangstar Vegas
The city of Las Vegas at your feet
Payback 2
Missions and events filled with minigames and vehicles
Vegas Crime Simulator
Try not to get caught breaking the law!
Block City Wars
Explore the gritty world of Block City
Grand Battle Royale
Try to be the last one standing on this island
Hero Hunters
Raw street battles from behind crated barricades

Real Car Crash
Take a look at what happens when you lose control of your car
Word Crossy
Make as many words as you can
Flippy Race
Drive your jet ski to the finish line in this wacky race
Mech Shark.io
Idle Kingdom Defense
Protect the castle from relentless enemy hordes
Fill The Fridge
Store your groceries in the fridge
Nonogram puzzle
Add color to the seasons by solving nonograms
brain:code
Logic puzzles that will make you feel like a programmer